As democracy comes of age, he says, youths are continuing to challenge policies developed by the seniors.

“Democracy has opened doors to young leaders, and so we have to groom them,” he said.

With that background, EU in partnership with Makerere University, commemorated the 2019 International Democracy Day with a special conference at the university main campus, in Kampala.

The event is scheduled for this Thursday, September 19, 2019, at the Makerere University Main Hall.

With the theme, “The role of Parliament in shaping representative democracy in Uganda,” the organizers seek to create a platform where current leaders can interface with the people they represent.

The event which has been made open to university students in the country, leaders and other stakeholders, will also attract civil society, representatives from diplomatic missions and development partners.

Through the conference, the organizers seek to discuss the ability of Uganda’s representatives to advance gender equality, accessibility of Parliament by the average Ugandans.

It is also intended to measure the importance of media coverage on the public’s understanding of what parliament does.

While addressing journalists on Monday at Makerere University, Pacific said democracies today face many challenges, where the youth have come up to challenge policies.

In addition, he said, the challenges are not limited to Uganda, but the rest of the world.

“It is crucial that every Ugandan is given equal treatment so that they can participate fully in democracy. This is the only way you can hold your leaders accountable,” he said.

According to Pacific, Makerere University was selected because of its continued contribution to leaders, and policies in the country.

For so long, he said, a number of East African leaders have gone through Makerere and that it is suitable for them to host the conference.

His view was backed by Prof Barnabus Nawangwe, the Makerere University Vice-Chancellor, who said that about over 60% legislatures in Parliament are alumni of the Ivory Tower.

In addition, he said, a good number of the university alumni have gone on to serve at the national level which he attributed the institution’s culture of availing a platform to take part in leadership.

“We have allowed students to take part in all forms of democratic practices, including holding free and fair Guild elections,” he said. 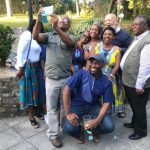